Top 10 Inspiring Bangladeshis around the World 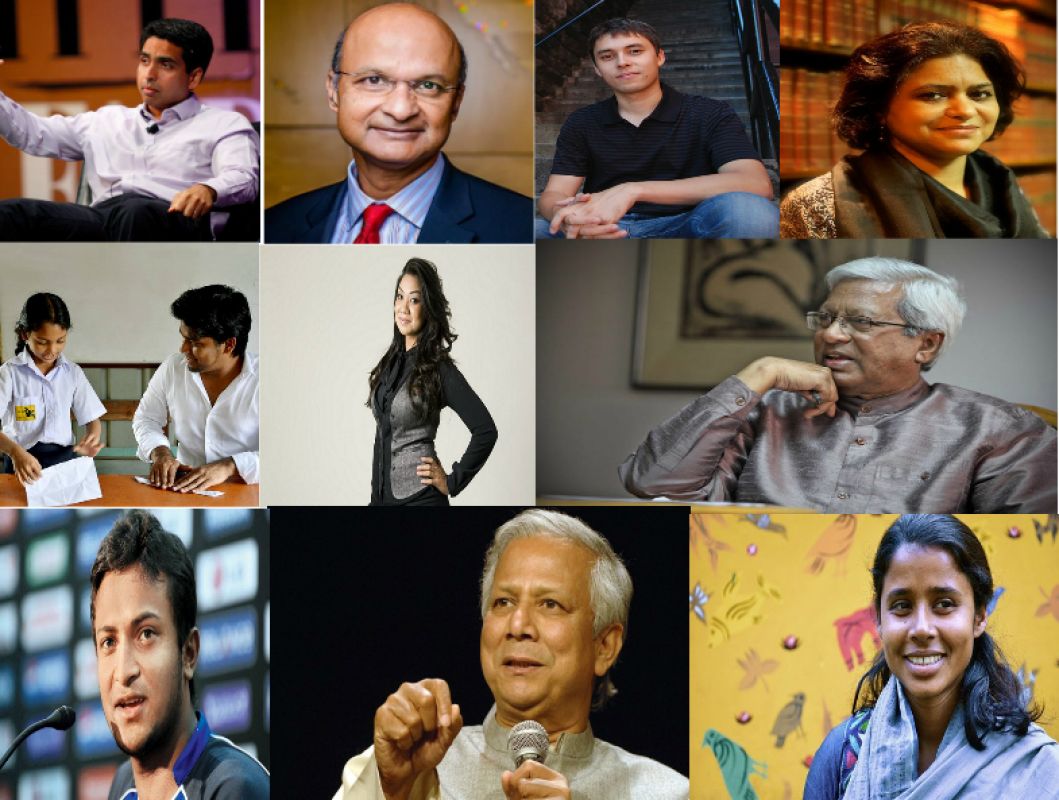 We the people of Bangladesh generally take inspiration from other countries' people to reach our goal. But there are some people in our country who make history and people from all over the world take inspiration from them. London-based organization British Bangladeshi Power andInspiration has published a list of top ten inspiring Bangladeshis around the world. Nobellaureate and Grameen Bank founder Dr. Muhammad Yunus topped the list. The list of the top ten inspiring Bangladeshis and their short description is given below:

2. Jawed Karim:He is an internet entrepreneur. He is best known for being a co-founder of YouTube. Many of the core components of PayPal, including its real-time anti-internet fraud system, were also designed and implemented by him. He has not come on the limelight but when YouTube was acquired by Google in 2007, he got $65m from Google.

3. Sir Fazle Hasan Abed:He is a social worker and the founder and chairman of BRAC. Brac is the largest NGO in the world. For his outstanding contributions to social improvement, he has received the Ramon Magsaysay Award, the UNDP Mahbub Ul Haq Award, and the inaugural Clinton Global Citizen Award. He was appointed Knight Commander of the Order of St Michael and St George (KCMG) in 2010 for services in tackling poverty and empowering the poor in Bangladesh and globally.

4.Salman Khan:He is an educator, entrepreneur, and former hedge fund analyst. He is a graduate of MIT and Harvard Business School. He is the founder of the Khan Academy, a free online education platform that has produced over 6,500 video lessons, mainly focusing on mathematics and sciences. As of May 2016, the Khan Academy channel on YouTube has more than 2.6 million subscribers and the videos of the Khan Academy have been viewed more than 840 million times. In 2012, Time Magazine’s named Salman Khan in its annual list of the 100 most influential people in the world.

5.Korvi Rakshand:He is a Bangladeshi social entrepreneur. He is the founder of the Jaago Foundation, a non-profit organization. Jaago Foundation was founded in 2007. Now Jaago Foundation supports the education of 1800 children across its 13 branches all over Bangladesh. Korvi also founded Volunteer for Bangladesh in 2011. Today, this initiative to empower the Bangladeshi youth has more than 17,000 registered volunteers across the country. Korvi Rakshand was listed “Top 99 under 33 Influential Foreign Policy Leaders” in 2013 by The Diplomatic Courier; a Washington based international affairs daily.

6.Sara Hossain:She is a lawyer at the Supreme Court of Bangladesh and an honorary executive director of Bangladesh Legal Aid and Service Trust (BLAST). She played a key role in drafting Bangladesh’s first comprehensive legislation on violence against women, which became law in 2010. She also opposed the two-finger test in rape and sexual assault cases. In 2016, she was awarded the International Women Of Courage Award by the US Secretary of State.

7. Shakib Al Hasan:He is one of the best cricketers in recent times. He made his international debut against Zimbabwe in 2006 and impressed one and all. He soon became a regular member of the team and became a man to rely on. He performed consistently both with the bat and ball for the Bangladesh team. He is the only player who becomes the top all-rounder in all three formats of Cricket.

8.Omar Ishrak:He is the chairman and CEO of Medtronic. Medtronic is the world’s largest stand-alone medical technology development company, with a comprehensive product portfolio and broad global reach. It operates in more than 140 countries, employs over 85,000 people, and has more than 53,000 patents. Its annual revenue is 18.4 billion.

9. Sumaya Kazi:She is the founder and CEO of Sumazi, a social intelligence platform used by brands, celebrities, and enterprises. She was the first social media manager at Sun Microsystems. She has been acknowledged by Business Week as one of America’s “Best Young Entrepreneurs”, by CNN as a “Young Person Who Rocks” and by Silicon Valley Business Journal as a “Woman of Influence”

10. Nishat Mazumder:She works in the Dhaka Water Supply and Sewerage Authority (WASSA). She became the first Bangladeshi woman to scale Mount Everest. She reached the northern side of the mountain in 2012. She is an idol for girls all over the world who want to reach every height imaginable. Everyone is talented by born. But some people can not find their potential. They have gone on the wrong track and have become failures in their life.

Above mentioned people find their potential and reach on the top by working hard. If we work hard according to our potential, we may be the inspiring ones in the future. Bangladesh has many people who are inspiring and working for the country without buzzing anyone, they are doing for these contributions only for the well being of beloved Bangladesh.