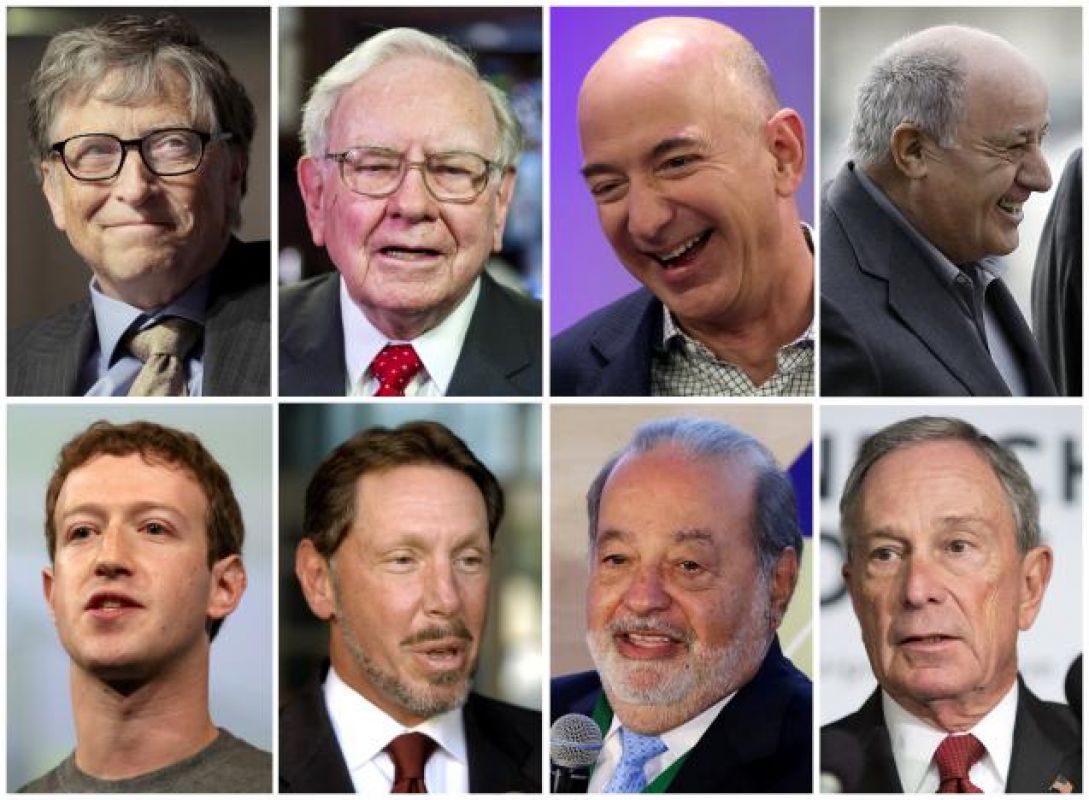 A combination photo shows (top, L-R) Bill Gates, Warren Buffett, Jeff Bezos, Amancio Ortega, (bottom, L-R) Mark Zuckerberg, Larry Ellison, Carlos Slim, and Michael Bloomberg. REUTERS/File PhotosJust eight individuals, all men, own as much wealth as the poorest half of the world's population, Oxfam said on Monday in a report calling for action to curtail rewards for those at the top.

As decision makers and many of the super-rich gather for this week's World Economic Forum (WEF) annual meeting in Davos, the charity's report suggests the wealth gap is wider than ever, with new data for China and India indicating that the poorest half of the world owns less than previously estimated.

Oxfam, which described the gap as "obscene", said if the new data had been available before, it would have shown that in 2016 nine people owned the same as the 3.6 billion who make up the poorest half of humanity, rather than 62 estimated at the time.
In 2010, by comparison, it took the combined assets of the 43 richest people to equal the wealth of the poorest 50 percent, according to the latest calculations.

Inequality has moved up the agenda in recent years, with the head of the International Monetary Fund and the Pope among those warning of its corrosive effects, while resentment of elites has helped fuel an upsurge in populist politics. Concern about the issue was highlighted again in the WEF's own global risks report last week.

"We see a lot of hand-wringing - and clearly Trump's victory and Brexit gives that new impetus this year - but there is a lack of concrete alternatives to business as usual," said Max Lawson, Oxfam's head of policy. "There are different ways of running capitalism that could be much, much more beneficial to the majority of people."

SUPER-CHARGED CAPITALISM
Oxfam called in its report for a crackdown on tax dodging and a shift away from "super-charged" shareholder capitalism that pays out disproportionately to the rich. While many workers struggle with stagnating incomes, the wealth of the super-rich has increased by an average of 11 percent a year since 2009.

Bill Gates, the world's richest man who is a regular at Davos, has seen his fortune rise by 50 percent or $25 billion since announcing plans to leave Microsoft in 2006, despite his efforts to give much of it away.
While Gates exemplifies how outsized wealth can be recycled to help the poor, Oxfam believes such "big philanthropy" does not address the fundamental problem.

"If billionaires choose to give their money away then that is a good thing. But inequality matters and you cannot have a system where billionaires are systematically paying lower rates of tax than their secretary or cleaner," Lawson said.