The amount of money Bangladeshi loss for traffic jam 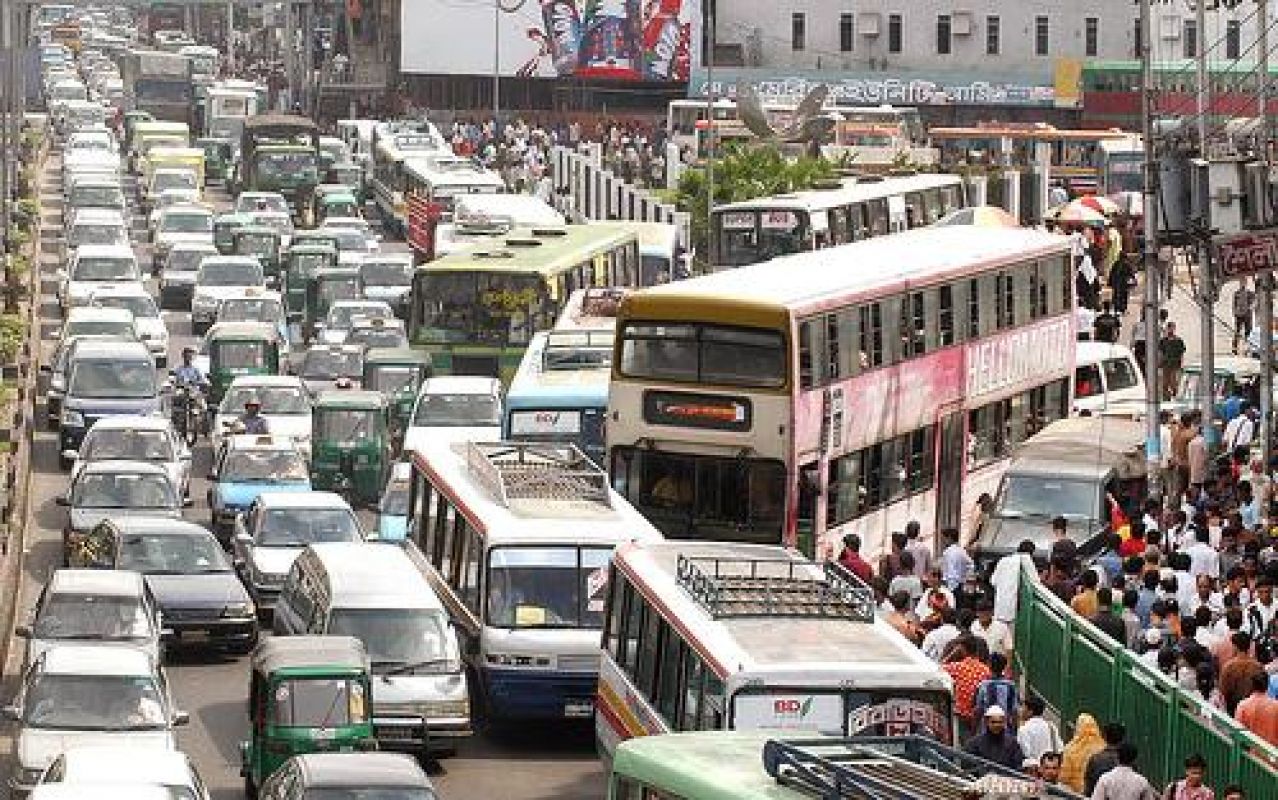 Traffic jam is very common problem in all cities of Bangladesh. In recent year traffic jam problem in Bangladesh are increasing at an alarming rate. This is a problem that requires more attention and needs to be dealt with more seriousness as it is killing lots of work hours. With those hours this country could achieve a lot more. We might not be noticing, everyday this country is falling behind due to this one common problem. This problem makes impedance for our economic growth.

Due to traffic jam, Bangladesh faces the loss of Taka 1,176 billion. Dhaka's traffic jam only eats up about Taka 550 billion per annum, said experts of the sector. So Dhaka city plays a major role in wasting money due to traffic jam. “The estimated loss is now 50% more than what it was in 2010” , said Abdullah Al Mamun, team leader of a study carried out five years ago to assess the financial loss in traffic jam. The study jointly operated by the Metropolitan Chamber of Commerce and Industry (MCCI) and Chartered Institute of Logistics and Transport Bangladesh in 2010, said that the annual cost of traffic jam in capital Dhaka was around Taka 1 billion a day. According to the study, about 3.2 million business hours were lost per day due to the traffic jams. Abdullah Al Mamun, now a divisional engineer at Rangpur Roads and Highways Department, told that the number of vehicles has now increased manifold in Dhaka as compared to what it was in 2010.“The number of roads has not increased compared to vehicles, creating more traffic congestion in Dhaka. The financial loss caused by traffic congestion is 50% more than five years ago,” Mamun said. That means, the financial loss of traffic congestion in Dhaka comes to about Taka 1.5 billion per day and 550 billion per annum. Anis Ud Dowla was the president of the MCCI in 2010. He told  recently, “Though there has been no research on the issue in the last five years, it can be said that the financial loss for traffic congestion has risen to 10% more than what it was five years ago.” “Time is money' is the mantra for business, but most of our time is lost just moving from one place to another,” Anis said. “The first obstacle the foreign investors raise in Bangladesh is traffic congestion.

The progress of a country relies on the facilities for businessmen. We are facing so many hurdles in taking the country to middle income status,” he added. Mustafizur Rahman, executive director at the Centre for Policy Dialogue (CPD) said, “The financial loss that we face for loss of work hours has a negative impact on every sector of production, investment, and consumption.” “This loss raises production cost of our products, decreases competitive ability and frustrates foreign investment,” Mustafizur added. Prof Shamsul Haque of Bangladesh University of Engineering and Technology (BUET) said, “Integrated information is essential for this sort of research. It is the responsibility of government institutions to collect year-wise data. But they are not doing this.” “Loss of work hours varies from person to person. There will be differences between a student and a bank chief executive in this regard,” Shamsul added. Prof. Md Tajul Islam of the National Institute of Mental Health told , “City dwellers are now immensely tired of everyday the traffic gridlock. We have observed a rise in hypertension diseases and fall of tolerance among Dhaka dwellers. These behavioral disorders are harmful to human relationships.” “There has been on financial loss due to traffic congestion, but no one thought of conducting research on the psychological harm caused by this,” Tajul added.

According to my point of view, we need to work on the basis of long term plan and at the same time take care of short term solution to remove current discomforts or problems. It needs a balance plan so that to fulfill short term solution we do not ruin the long term plan. I have some suggestions to solve this problem. Such as:
If we really want to solve this problem, then the decentralization is a must of everything. Our industrialization should be based on upozilla, it should not depend on metropolitans. After that, government must make a good public transport system so that people use it easily and it will reduce traffic jam. Again, government should establish a good traffic system and create lane for different vehicles and strictly maintain it. Only government can not solve this problem. We the people of Bangladesh should co-operate the government. We should use zebra cross and foot over bridge while crossing roads and should respect the law. Above all, we have to solve this problem urgently as it harms our economy seriously.