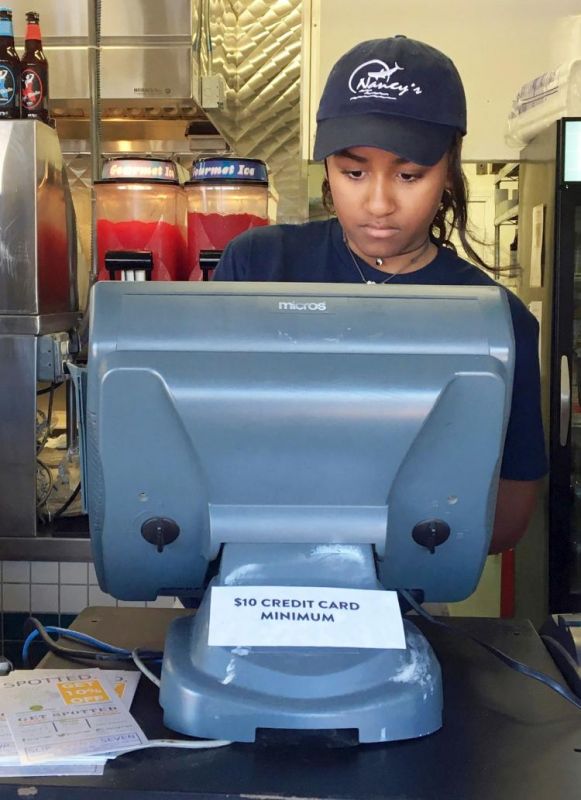 When you are the daughter of the president of a country, you may not work at a restaurant to spend the summer vacation. In Bangladesh, working in a restaurant seems like an odd job for high class people’s children as they believe that this type of job may hamper their social status. Unlike most teens, the First Daughter Sasha Obama, daughter of US President Barack Obama, has exchanged the luxury of the White House for the counter of a seafood restaurant. She is just 15 years old.

But she has taken a summer job which is serving food at the business in Martha's Vineyard, Massachusetts. In between serving up everything from milkshakes to fried seafood, President Barack Obama‘s daughter totally owned her summer job. She rocked the navy shirt and khaki pants combo with no issue, working the cash register at Nancy’s restaurant. As well as working on the takeaway counter, Sasha Obama's other duties reportedly include waiting on tables and helping to prepare the restaurant for its lunchtime opening.

The 350-seat restaurant is a go-to spot for the Obamas during their annual getaway to the Vineyard. Sasha seemingly landed her summer gig because her parents have supposedly been friends with the restaurant’s owner Joe Moujabber for years. The town Massachusetts is a favorite location for the Obamas on their summer breaks. Their younger daughter finishes work by 11:30 a.m., half an hour after the eatery opens.

She has done a four-hour shift. In spite of being the President’s daughter, She has been trying to keep herself as low-profile as possible. Using her full name, Natasha, she has been associated with the restaurant by a group of six secret service agents, the Boston Herald reports. Her security team has been seen waiting nearby in a large car or sitting on benches while the First Daughter deals with tourists' meals.

A co-worker told the Herald "She has been working downstairs at the takeout. We were wondering why there were six people helping this girl, but then we found out who it was." The White House has not commented on the report but First Lady Michelle Obama has spoken about trying to bring her two daughters up as normally as possible. Sasha’s big sister Malia will study at Harvard next year, and last summer, she interned on the set of HBO’s hit series “Girls.”