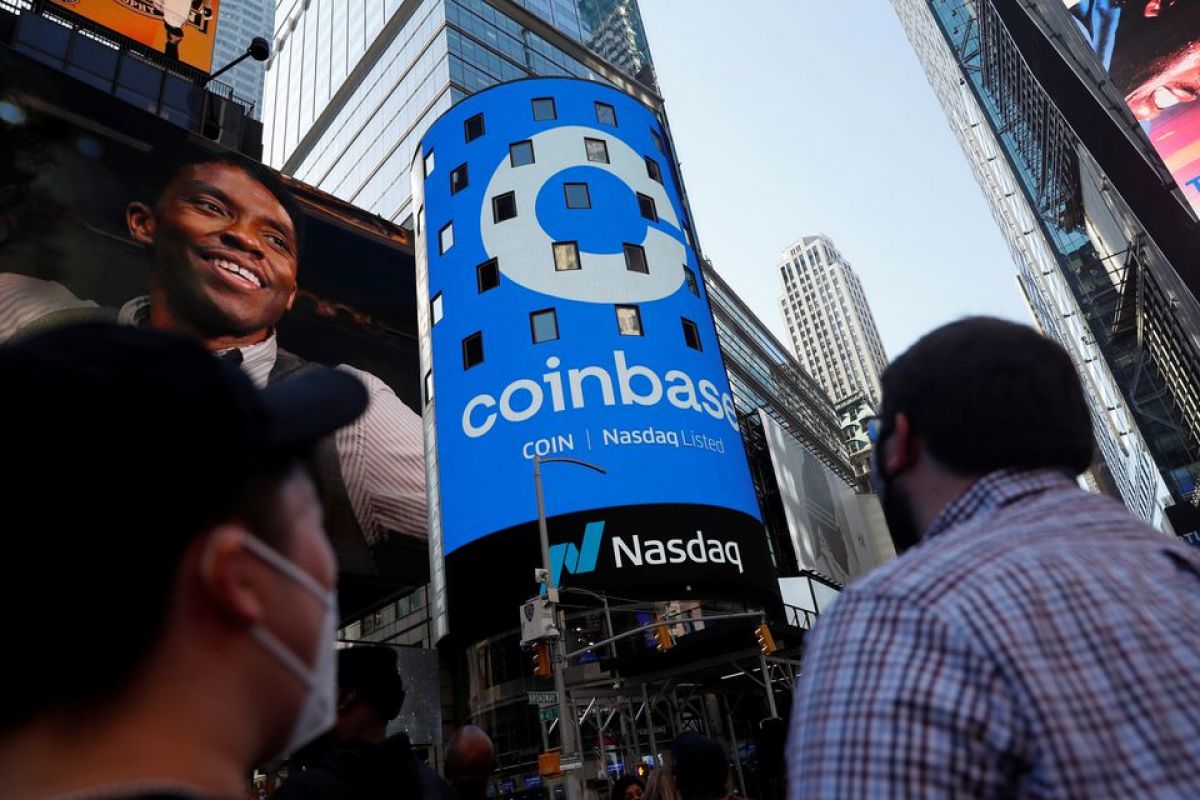 The logo for Coinbase Global Inc, the biggest U.S. cryptocurrency exchange, is displayed on the Nasdaq MarketSite jumbotron and others at Times Square in New York, U.S., April 14, 2021. REUTERS/Shannon Stapleton
Coinbase Global Inc (COIN.O) shares jumped 11% in early trading on Thursday, a day after the cryptocurrency exchange went public in a high-profile debut on the Nasdaq that briefly valued it at more than $100 billion.
The debut, done through a direct listing where no shares are sold ahead of the opening, marked another milestone for bitcoin and other digital assets and came amid a surge in the value of cryptocurrencies that has lured a clutch of mainstream, top-tier firms.
Cathie Wood’s Ark funds bought $246 million worth of Coinbase shares on Wednesday, while one of her funds sold a $4.4 million stake in New York Stock Exchange-owner Intercontinental Exchange (ICE.N), according to the firm’s daily trade summary.
"Obviously, the excitement is there because this really just strengthens the idea that, right now, you can invest not into cryptocurrencies per se, but in companies that are already in business in the cryptocurrency market," said Ipek Ozkardeskaya, senior analyst at Swissquote Bank.
"At some point, there will be a normalization in the transaction levels (in cryptocurrencies) and that's exactly what traditional investors are looking to understand - are these levels normal? Probably not."
Founded in 2012 by Brian Armstrong and Fred Ehrsam, San Francisco-based Coinbase has 56 million users globally and an estimated $223 billion assets on its platform, accounting for 11.3% of the crypto-asset market share, regulatory filings showed.
Coinbase's valuation, which was just under $6 billion as recently as September, has surged in tandem with bitcoin's gains this year. The world's biggest cryptocurrency, however, was down about 0.9% on Thursday after hitting a record high of $64,895.22 a day earlier.
At 6:42 a.m. ET, Coinbase shares were up 9.4% at $358.61, valuing the cryptocurrency exchange more than Nasdaq Inc (NDAQ.O) and Intercontinental Exchange put together.
News Source: reuters
Category and Tags
Technology Coinbase
Like 0 Comment1 Share