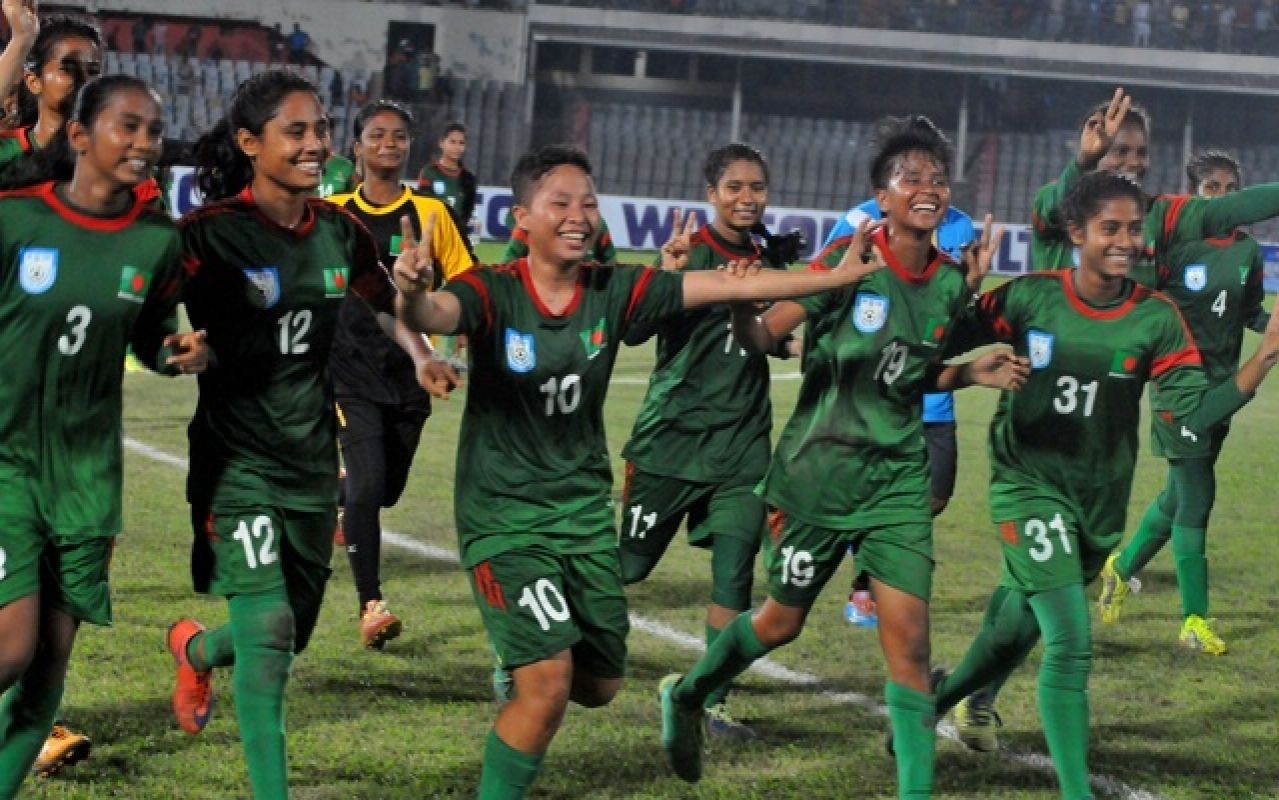 History was made by Bangladeshi girls by qualifying for the final round of the 2017 Under-16 Asian Football Confederation Women’s Championship. In the Group C qualifiers, they beat Chinese Taipei 4-2 at Bangabandhu National Stadium on Saturday. For the first time, a Bangladesh women’s football side is progressing to the final round of an AFC tournament.

The girls displayed a magnificent show to come from an early goal deficit and rescue three vital points to keep up their hundred percent record in the event. Defender Shamsunnahar netted a brace earlier in the first half as Bangladesh took a much-deserved 2-1 lead. Both goals were scored by the penalty. Captain Krishna Rani Sarkar earned the spot-kicks.

She has been in excellent form throughout the tournament, scoring five goals so far. Shamsunnahar calmly made the penalties to spark wild celebrations in the dugout. The girls in red and green started the game brightly but a sudden attack against the run of play in the 11th minute enabled the visitors to go ahead. Captain Su Yu-Hsuan made a sudden strike from 20 yards out and it beat Bangladeshi goalkeeper Mahmuda Akter into the back of the net.

Bangladesh made a couple of chances after going behind and at last, scored the equalizer in the 26th minute. Chinese Taipei defender Chen Chiao-Yi brought down Krishna. She looked threatening inside the box on many occasions. They were reduced to 10 players because Chen received her second yellow card for the foul. Shamsunnahar made no mistake to score the goal.

Captain Krishna got another penalty in the 38th-minute from which Shamsunnahar again scored to give the home side the lead. This time, Chinese Taipei skipper Su fouled the Bangladeshi midfielder at the edge of the box. Bangladesh continued to dominate its opponents later in the second half. Krishna enhanced the lead 11 minutes into the second half with a classic left-footer after striker Anuching Mogini split the opposition defense with a superb lob to set the midfielder up inside the box.

Sending the ball home from a yard away during a goal-mouth melee, Marzia Khatun sealed victory in the 78th minute. Chinese Taipei was able to pull one back two minutes before the ending time through their midfielder Wu Yu-Jou, but it was too late for this match. Defender Teng Pei-Lin received her marching order in the 90th minute as they were reduced to nine players.